MARCH FUN FACTS:
It’s March—Happy New Year, ancient Romans! Welcome to the third month of the year—or, if you were born before 150 B.C., the first! According to the oldest Roman calendars, one year was ten months long, beginning in March and ending in December. It may sound crazy, but you can still see traces of this old system in our modern calendar: because December was the tenth month, it was named for the number ten in Latin (decem), just like September was named for seven (septem). So, what about January and February? They were just two nameless months called “winter,” proving that winter is literally so awful it doesn’t even deserve a spot on the calendar. With the recent weather we have been getting seems fitting to skip over January and February.

FIRE DEPARTMENT FUNDRAISER:
Due to current weather conditions one of many events have had to cancel and or postpone and revamp the original plan. This includes the annual Bridges Polar Plunge Fundraiser for our Lake Nebagamon Fire Department. This is become a very important event for our local department. There will still be the fundraiser on Sunday March 3, 2019. **Since we are not able to jump in the lake this year we would still like to show support and have a fundraiser for the LN Fire Department. Join us this Sunday at 1pm for some food, fun, and prizes! We also figured it would be a great time to have some MINNOW RACES! We will have some great prizes so please join us. Bridge’s Bar will be donating 20% of the sales that day also so come have some drinks;)**

BOOK ACROSS “BAGAMON”:
Cancelled… Another event that was in the planning has been cancelled due to ice and weather conditions. Sorry for all those that have asked to have this returned again this year. Mother Nature has taken control and we have had no choice but to say “better luck next year.”

ST PATRICKS DAY FACTS:
Saint Patrick
Patrick was a 5th-century Romano-British Christian missionary and bishop in Ireland. Much of what is known about Saint Patrick comes from the Declaration, which was allegedly written by Patrick himself. It is believed that he was born in Roman Britain in the fourth century, into a wealthy Romano-British family. His father was a deacon and his grandfather was a priest in the Christian church. According to the Declaration, at the age of sixteen, he was kidnapped by Irish raiders and taken as a slave to Gaelic Ireland. It says that he spent six years there working as a shepherd and that during this time he “found God”. The Declaration says that God told Patrick to flee to the coast, where a ship would be waiting to take him home. After making his way home, Patrick went on to become a priest.

According to tradition, Patrick returned to Ireland to convert the pagan Irish to Christianity. The Declaration says that he spent many years evangelizing in the northern half of Ireland and converted “thousands”. Patrick’s efforts against the druids were eventually turned into an allegory in which he drove “snakes” out of Ireland (Ireland never had any snakes).
Tradition holds that he died on 17 March and was buried at Downpatrick. Over the following centuries, many legends grew up around Patrick and he became Ireland’s foremost saint.

Celebration and traditions
According to legend, Saint Patrick used the three-leaved shamrock to explain the Holy Trinity to Irish pagans.
Today’s St Patrick’s Day celebrations have been greatly influenced by those that developed among the Irish diaspora, especially in North America. Until the late 20th century, St Patrick’s Day was often a bigger celebration among the diaspora than it was in Ireland.

Celebrations generally involve public parades and festivals, Irish traditional music sessions (céilithe), and the wearing of green attire or shamrocks. There are also formal gatherings such as banquets and dances, although these were more common in the past. St Patrick’s Day parades began in North America in the 18th century but did not spread to Ireland until the 20th century. The participants generally include marching bands, the military, fire brigades, cultural organizations, charitable organizations, voluntary associations, youth groups, fraternities, and so on. However, over time, many of the parades have become more akin to a carnival. More effort is made to use the Irish language, especially in Ireland, where the week of St Patrick’s Day is “Irish language week”.

Christians may also attend church services, and the Lenten restrictions on eating and drinking alcohol are lifted for the day. Perhaps because of this, drinking alcohol – particularly Irish whiskey, beer, or cider – has become an integral part of the celebrations. The St Patrick’s Day custom of “drowning the shamrock” or “wetting the shamrock” was historically popular, especially in Ireland. At the end of the celebrations, a shamrock is put into the bottom of a cup, which is then filled with whiskey, beer, or cider. It is then drunk as a toast to St Patrick, Ireland, or those present. The shamrock would either be swallowed with the drink or taken out and tossed over the shoulder for good luck.

9TH ANNUAL WARRIORS RIDE – SATURDAY, MARCH 2: COME OUT AND RIDE THE TRAILS AND HAVE SOME FUN SUPPORTING OUR TROOPS AND VETERANS! SIGN-UP STARTS ON FRIDAY, MARCH 1st AT 5:00 – 9:00 PM AND AGAIN AT 9:00 AM SATURDAY, MARCH 2nd UNTIL THE START OF THE RIDE AT THE ROADHOUSE BAR ON U.S. HIGHWAY 53 IN HAWTHORNE, WI. RIDE WILL START AT APPROX. 11:00 AM AND WILL CONTINUE THROUGHOUT THE DAY VISITING VARIOUS STOPS ALONG THE BEAUTIFUL TRAILS OF DOUGLAS COUNTY WI.

MEETINGS: We meet the second Tuesday of each month, at 6:00pm in the lower level of the Lake Nebagamon auditorium. Everyone is welcome.
NEWS SUBMISSIONS: DEADLINE is the 20TH OF EACH MONTH.

DONATIONS: If you would like to donate paper so we may continue to have our newsletter contact the village office (715-374-3101) or Patti Coughlin at Dockside (715-374-2334). If you are interested in receiving an email copy of the newsletter monthly end request in email to: nebagamoncommunityassociation@gmail.comNCA (Nebagamon Community Association):
We meet the second Tuesday of each month at 6pm in the lower level of the Lake Nebagamon Auditorium. Our February 12, 2019 meeting will be held at the Lake Nebagamon Auditorium at 6pm.

NEWS SUBMISSIONS: DEADLINE is the 20TH OF EACH MONTH.

DONATIONS: If you would like to donate paper so we may continue to have our newsletter contact the village office (715-374-3101) or Patti Coughlin at Dockside (715-374-2334). If you are interested in receiving an email copy of the newsletter monthly end request in email to: nebagamoncommunityassociation@gmail.comNCA (Nebagamon Community Association):

DO YOU REALIZE ALL THE DAILY EVENTS HAPPENING IN OUR COMMUNITY?
Sundays:
Worship services at all the area churches
All Day Bloody Mary Bar at Bridges Tavern
(Every other) Sunday Free Skating, Lake Nebagamon Auditorium at 2pm

Thursdays:
Zumba (5pm-6pm) /Yoga (6pm-7pm) exercise class, Lake Nebagamon Auditorium
In a rotation you can find live music at all the establishments in this area. Watch Facebook or the monthly calendar enclosed for schedules. There is so much to do in our area so get out and enjoy what we have to offer here.

Lake Nebagamon Volunteer Fire Department:
Do you know anyone girls or boys entering the 7th-12th grade that would be interested in a continuing education youth class for our future firefighters? This is a great opportunity for anyone interested. The Lake Nebagamon Volunteer Fire Department sees the importance and the great opportunity, so they are sponsoring two youth to be able to go to this camp. Start by writing a short essay about why they want to be a part of this leadership camp, they will be judged by the Fire Dept. Entries can be mailed to the LNFD -PO Box 213 Lake Nebagamon, WI 54849 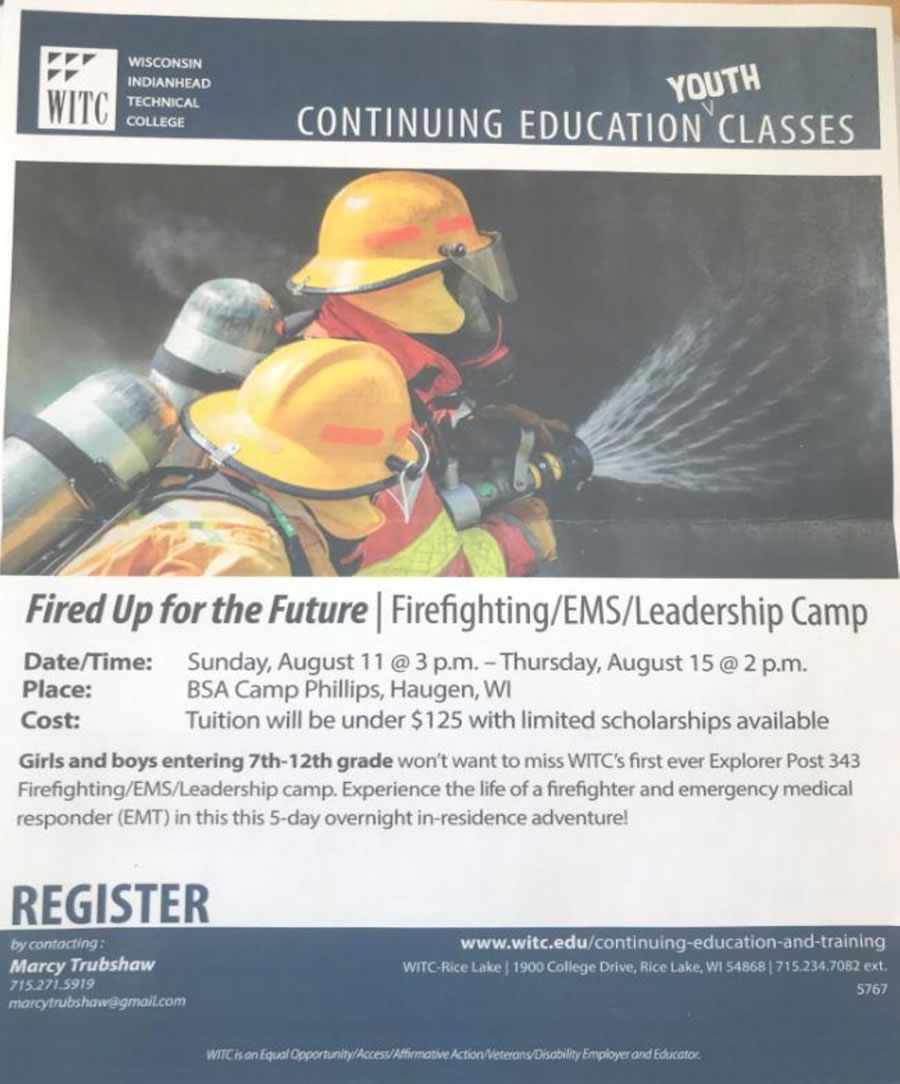